China's water supply − how does this impact the future of its dairy industry?

China faces huge challenges when it comes to water supply in the future, something we explore in the latest edition of Dairy Products China News.

In this month’s issue of Dairy Products China News (DPCN), we take a look at China’s rising production of alfalfa, which in turn reminds us how important water supply will be for the future of its dairy sector.

Articles have appeared over recent years questioning why California is producing increasing volumes of alfalfa for export to China’s dairy farms whilst suffering from a drought at home. The flip side of this is that, whilst China has been exerting “water power” over its Southeast Asian competitors this year, it suffers major water deficiency. Millions have died in floods caused by collapsed dykes on occasion and hydrological competence has been central to the fortunes of numerous dynasties in the past.

More recently, when the Yellow River dried up in 2007, this was symbolic of the huge challenge the country faces. The first water census in 2012 showed that more than 28,000 rivers, almost half the country’s total, had disappeared in the preceding two decades. Depletion and pollution are profound problems, especially in northern China, where the country produces most of its milk. This made the session at last month’s dairy conference in Qingdao focused on the China–New Zealand Water Research Collaboration Project highly relevant. It also provides perspective to the serious floods which have affected the northern regions last month.

This issue will exert a key influence on China’s ability to raise its milk production to meet demand. That’s a fundamental strategic issue, but for now the tactical issue is almost the reverse, as local milk prices tumble whilst powder stocks are as high as 400,000-500,000 tonnes according to the President of the Dairy Association of China. The irony will not be lost on those monitoring the international “milk flood”, which is finally showing signs of abating. A local presence is critical for businesses with long-term plans in the country, but the market’s development continues to provide a bumpy ride.

The current issue of DPCN explores this and other issues in more detail – please see the Table of Contents below.

If you would like to receive a free sample issue of DPCN, or discuss any other aspect of China’s dairy market, please just get in touch. 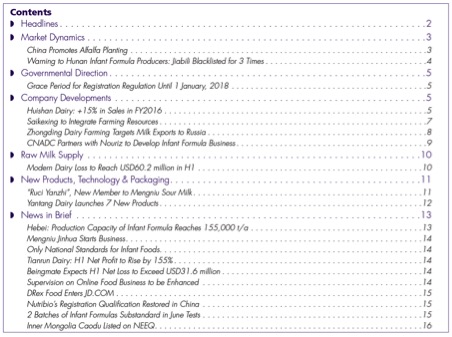